I am really excited to send my submissions for the 2018 Sketch for Survival Silent Auction. Because this year they are taking the collection on a UK tour in October and November to generate as much publicity and exposure as possible. This will include the prestigious Gallery at The Oxo Tower on the South Bank in London and 3 days in New York.

Sketch for Survival is part of Explorers Against Extinction and last year the Silent Auction raised almost £40,000. This enabled them to donate money to Rhino Conservation Botswana and the Ol Pejeta Conservancy in Kenya and the David Sheldrick Wildlife Trust. This year they have included Giraffe Conservation Fund among others. Charities very close to my heart.

My A4 graphite pencil sketches

I chose to submit my Baby Rhino sketch as I wanted to support the conservation of Rhinos in Africa. Ian, a Southern White Rhino who was just 2 months old when I saw and photographed him in May 2015 at the Cotswold Wildlife Park . He was such a delight to watch as he scampered and played in the paddock and then flopped down on the grass completely exhausted from his exertions.

My second sketch was a no brainer as I love giraffes and wanted to support the Giraffe Conservation Fund with whom my daughter has a very close association. Fiona gave me permission to use her photograph of a young Southern African Giraffe calf she had photographed in Kruger’s National Park South Africa. 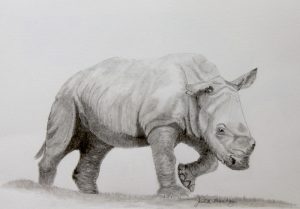 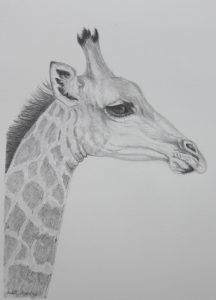 The SAA Paint A Poppy Challenge

You can find out more about which cookies we are using or switch them off in settings.

This website uses cookies so that we can provide you with the best user experience possible. Cookie information is stored in your browser and performs functions such as recognising you when you return to our website and helping our team to understand which sections of the website you find most interesting and useful.

Strictly Necessary Cookie should be enabled at all times so that we can save your preferences for cookie settings.

If you disable this cookie, we will not be able to save your preferences. This means that every time you visit this website you will need to enable or disable cookies again.

This website uses Google Analytics to collect anonymous information such as the number of visitors to the site, and the most popular pages.

Please enable Strictly Necessary Cookies first so that we can save your preferences!